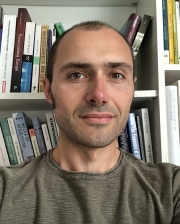 Jakob Krais is currently a research fellow with the special program “Islam, the Modern Nation-State and Transnational Movements” at the Gerda Henkel Foundation with a research project on sports and modernity in colonial Algeria. He has taught at different universities and worked as an affiliated researcher at the Leibniz-Zentrum Moderner Orient (ZMO) and the Centre Marc Bloch, Berlin, as well as at the Center for Near and Middle Eastern Studies (CNMS), Marburg. He studied History, Islamic Studies, and Philosophy in Berlin and Rome and obtained his PhD (on historiography and nation-building in Qaddafi’s Libya) from Freie Universität Berlin in 2014. He has published on Algeria and Libya in international journals, such as IJMES, CSSAAME, or The Maghreb Review.